Infertility is a nightmare:  A soul-destroying shadow of resolve crushing and pulverising.  Honestly, as the cliché goes, I wouldn’t wish it on my worst enemy. I had more moments of despair and torrid embarrassment than I feel comfortable admitting and as many times as I saw some woman posting upon a particular PCOS facebook group for the rest of us not to give up hope I admit that my emotional strength was not there most times. I didn’t believe them.

How far back should I go to get a stranger to fully understand how I am feeling at the moment? Two years, ten, twenty? I grew up with a daycare/nursery business ran from my living room and therefore was always around babies. I love kids. Always have and always was able to chat to them easily and get them to do what I want (not letting that power get to my head hasn’t been as easy muhahahahaha). I genuinely wanted to be a mum from the time I was 19. Nature, on the other hand decided to give me a slap in the face and refuse it for me.

I was born with Poly Cystic Ovarian Syndrome. It’s not a life-threatening condition and for the most part I can live a “normal” life with loads of additional annoyances and uncomforts. I have had hell with menstruation *should probably not read further if you don’t wanna hear about gynecological stuff* never knowing when it was coming or for how long. As a teen I kept being told that one day it would sort itself out. Well after finding the love of my life and reaching the ripe old age of 29 I still hadn’t a period that could be predictable. We knew that starting a family was going to be difficult. If you only have three periods a year and they aren’t predictable how on earth can you know when to get down and busy with the babymaking?

After being married for nearly a year and not using any type of birth control, I felt a strong prompting to go to our doctor and ask to be referred for fertility treatment. We were told the waiting list to be seen would be nearly 9 months after our initial GP appointment!

I am not a patient person.

Four months into our wait (and nearly eight months since my last period) I woke up one morning in excruciating pain. My stomach, although looking its normal pudgy self, felt as if it were stretched out nearly two feet.  After three days of agony our GP made an emergency appointment with the gynaecologist and off we went where I was told that my uterine lining had built up to such an extent that It was causing this pain. This is very dangerous, for one being pain and two: the risk of uterine cancer rises dramatically. I was sent home with some pills and thus started a pill-taking regime that shall forever more (with me) be executed with military precision. I have become an adept expert at timing cycles. Although this seemed terrible, with hindsight, I consider it a blessing in disguise. We received a letter from the fertility clinic inviting us to an appointment the following week.

Infertility treatment can be very degrading. You lose all sense of privacy. Previously my cultures (American and English) are very reserved about your own body and so therefore I was conditioned to be embarrassed. This was something that I had to get over quickly. Tests are invasive and painful. My veins are nearly invisible and one day I ended up getting poked eight times just to draw blood! I walked out of the phlebotomist’s office looking like an emo with so many bandages on my arms and hands. I actually frightened a little boy who followed after me.

For our treatment I was given two sets of pills: one to induce periods (therolut) and one to induce ovulation (clomiphene aka clomid). CLOMID SUCKS! Please promise me that if you know someone who is forced to take it that you will treat them with kid gloves. It makes all sorts of random pregnancy symptoms even though you aren’t pregnant and it toys with your emotions. I hardly felt like myself and was apt to cry at any teensy sadness or sentimentality no matter how ridiculous. I made the mistake one of watching Toy Story 3 whilst in the grips of clomid induced hysteria.

I was perfect with my pill taking for the first three cycles and did all of the checks and….uh….other stuff that you need to do and three times it failed.

After three failed cycles I was told that I needed to call the doctor and discuss where we went from there. Bizarrely there wasn’t one available on the day that I called (Friday) and the nurse told me not to start my next round of clomid even though that I was the day I needed to take them. I listened. It wasn’t until the following Tuesday that the doctor finally called me and told me that yeah sure…I could take the pills for another three rounds no problems. GRRRRRRRRRRRRR. She advised me to take the period forcing pills and then two weeks after that start the ovulation pills. In the back of my head that felt wrong and even though these drugs are ridiculously expensive I couldn’t resist taking the ovulation pills three days later than I should have. Sure it was a preposterously slim chance that it would work but could I live with myself if I didn’t even try?

The first week after taking the clomid was the worst for me emotionally and it was in that frame when my close friend was left with the unenviable task of having to tell me that she was pregnant. Prior to that my strength at not being ridiculously jealous at the pregnant bellies that seems to surround me at every corner or at being able to not fall into a depression due to my failure as a woman was waining. I could barely attend church every week and talk to my friends about their children as if I still had hope. I desperately didn’t want to be one of those infertile women whom people can’t mention babies around and can’t be happy for others success. So when my close friend told me (in a kind and delicate way) I turned to mush; complete and utter mush. For most of the time I was able to balance the self-pity and depression of to one side but this hit me like a ton of bricks and I couldn’t help but be devistated at the injustice that she had the opportunity to have two babies when I couldn’t get one. I became a recluse for a few days. I couldn’t watch episodes of a favourite telly show because the main characters were trying to get pregnant. Life almost became too much for me. My poor husband was wonderful and always tried to keep my spirits up. The guilt of knowing that he wanted a family and I was the reason we couldn’t have one was horrible. Logically I know that this guilt is misplaced but logic and clomid do not friends make.

Hindsight is annoyingly great isn’t it? If only then I knew that my wait wouldn’t have to be much longer I would have been able to control myself.  I knew that I had to attend a girl’s summer camp in Estonia two weeks after this emotional setback, by then I was just barely, barely back to working condition.

The church I belong to has some amazing women and when you spend four whole days together you have ample opportunities to divulge your life stories to each other. There I met a woman named Anna who had gone through the same struggles and in a twisted way it’s nice to know you aren’t alone. Sure I don’t want others to suffer but I don’t want to suffer alone either.

I returned home from those rainy four days with a killer lower back ache. My lower back had never hurt before and I dismissed the pains as the bad sleeping conditions I found myself in. The weekend after that was Juhannus (a big celebration in Finland to celebrate John’s saint day and the midsummer day) on that Friday I knew I could first take a pregnancy test but both the hubster and I dismissed success as impossible due to the late pill taking and thought that we wouldn’t ruin the holiday weekend with bad news and would sort it out on the Monday. We had an ok weekend. Everyone was lovely to me but I wasn’t feeling like myself and didn’t want to be around a bunch a people. Plus my back wouldn’t let me have a moment of comfort.

Monday morning came and I was due to start the period inducing pills. I took the pregnancy test out of it’s package and with a sigh decided to get it the dreaded task done and over with. I steeled myself for yet again a negative response. Five-minutes later I returned to the bathroom and saw this: 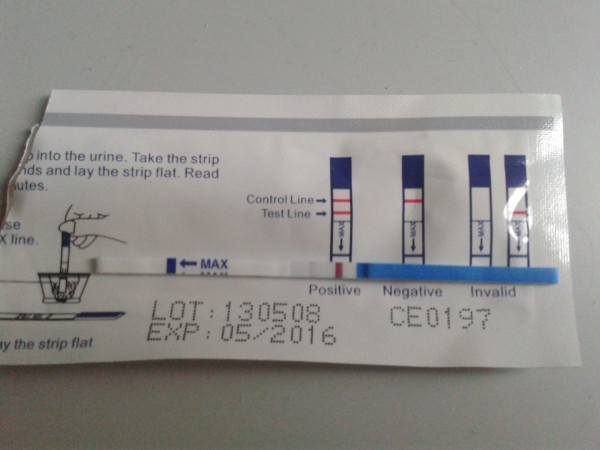 Completely disbelieving what I saw I shouted at my husband to arise from his early morning stuper and come see this. It was so hard to get to this point that part of me worried that somehow I had unconsciously faked a positive and therefore I made the hubby pee on another test just to make sure that my tests weren’t faulty….he's not pregnant btw.

Over the next few days the lines got darker and darker and after a confirmed blood test one day before my 30th birthday  I finally started to let myself believe it! BEST BIRTHDAY PRESENT EVER!!! It’s true when other fellow PCOS suffers tell each other not to give up hope, that it is possible. For doubting you I apologise.

We have been lucky enough to have two ultrasounds (odd benefit of fertility treatment I guess) and today we were able to see a blob that had recognisable body parts and a furiously beating heart. 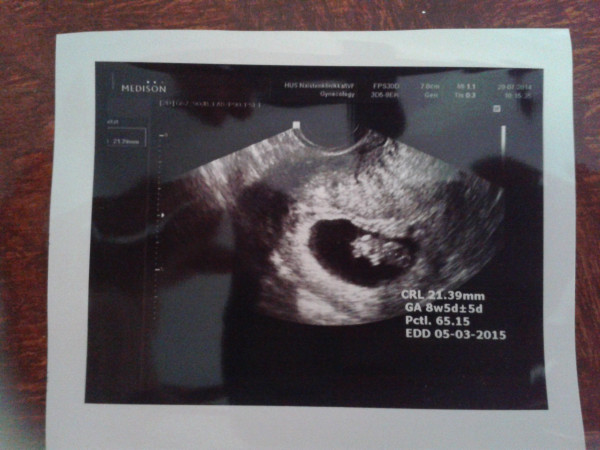 The smile on my husband’s face is one happy memory that I shall never forget.

So here’s to sending our sincerest thanks for your prayers, temple roll entries, magic spells and good vibes. It worked.

Now onto the next adventure….watch this space.