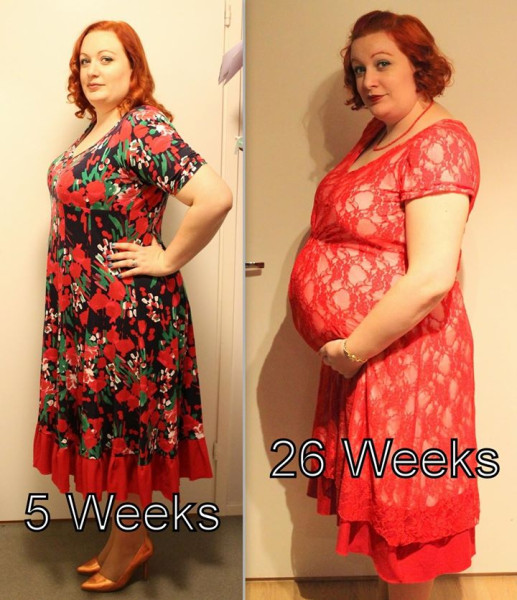 Finally allowing myself to research the whole of pregnancy I anxiously awaited this time as I was so hopeful for the supposed surge of renewed energy. Yes my nausea had finally dissipated but dangit the energy surge never came, I only managed to have slightly more energy than the first trimester....which is not what I wanted when I moved into a new house with white blank walls and a tremendous desire to complete the nesting stage. Oh why didn’t anyone ever explain to me just how strong the nesting instinct could be? As usual my ambition exceeded my capability and I started way too many diy projects.  I had wanted everything to be done before the baby got here since....she was going to care??? Actually I have no idea why I was/am so insistent that the whole house be prepared before she arrives.

The good was that I did receive a lot of help from friends and family especially with things like painting which I could not do because of the fumes. 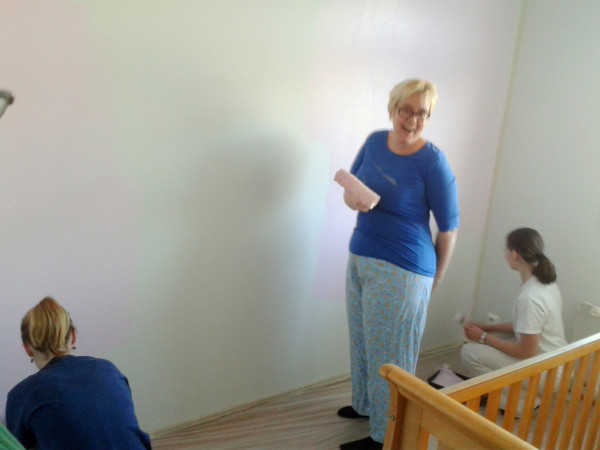 The bad: DAMN PINTEREST! Why must you haunt me with a plethora of fantastic baby ideas? There are loads and loads of baby products available to those lucky ones in the Americas but alas not so available here and therefore I was “forced” to create them on my own if I wanted them. Obviously you can live without them since Finnish babies do very well without them but I wanted them and how am I supposed to know what would help me tremendously and what will be languishing in the back of the closet unused? So far I ended up making wall art out of fabulous Disney Princess toile and old poster frames bought from the recycling centre for only a euro each, crochet a rug, made bumpers and five sheets for a crib and the top of a baby quilt. 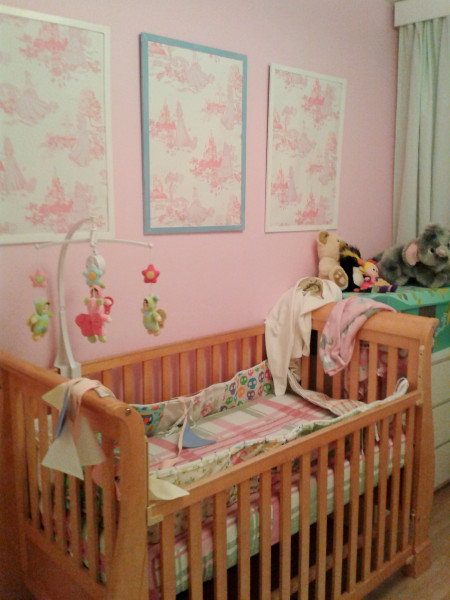 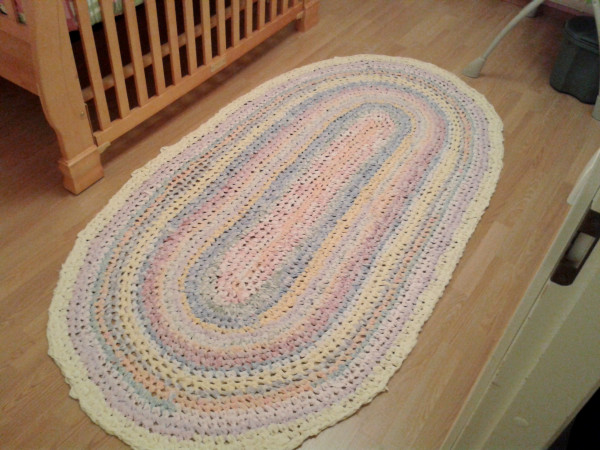 The ugly: Ambition and health do not go hand in hand. I suppose this bit surprised me the most. I suppose that I unconsciously expected myself to go back to pre-pregnancy energy levels which was a big big mistake. We did however get the nursery almost finished (just have to actually put stuff away), the living room and most of our bedroom which has given me a huge sigh of relief and also has made this place actually feel like our home. For the first time ever I have been allowed to paint walls and it’s been made extra special with a helpful hubster who has an opinion strong enough to lead us in a direction but not so strong that I feel in the end that I got what I wanted ;)

It was during this time that I still had to get myself to school as much as possible and still had to try to pay attention. Although I was very very lucky to have understanding teachers who gave me time off whenever I needed it it didn’t help calm my panic that I felt. The second trimester starts to bring in a whelp of worries and one I had particularly with school was “HOLY COW I HAVE TO LEARN AS MUCH FINNISH AS POSSIBLE RIGHT NOW!” knowing that I struggle to learn this monster of a language on my own and that I seem to do a lot better in a school situation I was really worried that I would forget all that I have learned in the first six months of the baby’s life. Especially since in all of the neuvola (midwife), doctor and hospital appointments we have been hounded with reminders that we are only to speak our native tongue to the child if we want her to be bilingual so there goes me being immersed in Finnish every day. 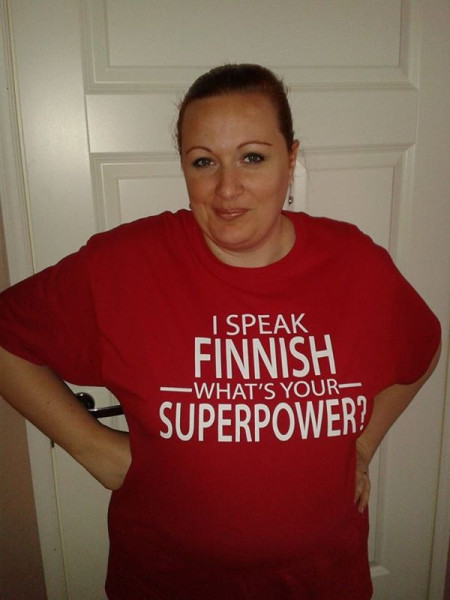 As usual, I was worrying over nothing. During this time I had two tests and in one of them me and my test partner were given a commendation for our speech abilities and were told that we were best in the class! The second test was definitely a pass but my inner Hermione Granger was disappointed that I didn’t really excel at anything, however a few friends beat me over the head with the realisation that I had still managed to pass while missing half of the classes and therefore should be satisfied. But it was still difficult to find the energy to pay attention to class when my body was undergoing such strange physical transformations.

One being the belly: so many women with PCOS like me have blogged that they didn’t get a defined baby bump until late in the seventh month and they wrote many posts with the intention to help the rest of us not to be disappointed that we didn’t look pregnant. After reading these I steeled myself up for just that and didn’t start sewing any maternity clothing. At 16 weeks I looked like this: 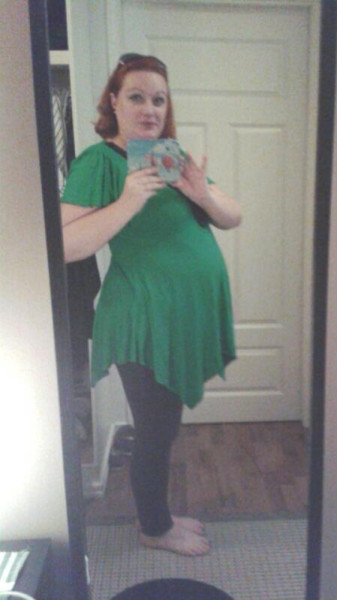 Holy huge bump and I have been wearing maternity trousers since week 9! Guess I wasn’t going to be one of them. I actually kinda like the fact that it’s obvious that I am pregnant and not just hungry when I rub my belly ;)
It does amaze me how my body started not to feel like my own. I have visible veins now and if I cut myself blood gushes, absolutely gushes. This is tremendously different from what I was before I was pregnant.  Our first action during fertility treatment was to get blood taken and bless the poor phlebotomist ladies couldn’t find a vein to draw blood from. I ended up being poked 8 times and frightened a poor boy in the laboratory waiting room.

I also am suffering from a very painful back and over the last few weeks at school I could only sit in the chairs for around an hour or so.  Therefore I alternated between standing and sitting and trying not to draw too much attention to myself. Bless my fellow students were very concerned about me and hilariously kept demanding that I lay down....uh....where during class?

Finally the best part of the second trimester must be the first time that you definitely are sure the baby is kicking! I personally don’t remember since I was feeling so many little movements and was never sure what I was feeling (was more afraid that I confused gas bubbles with something more elegant) but I do remember with clarity how emotionally special it was for us the first time that Ville felt his daughter kick: 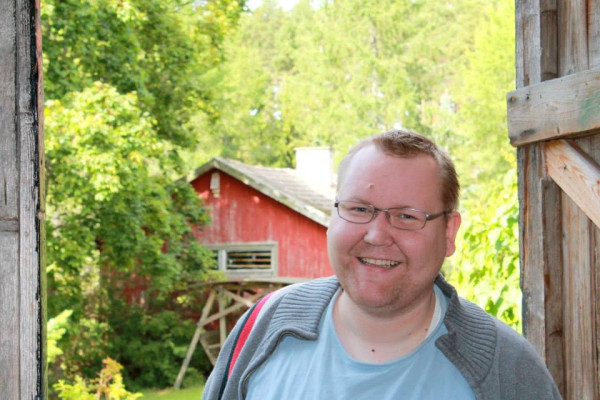 I had put his hand on my stomach many a time and the silly kid would immediately calm down. One night, a day before a Finnish language test for me I asked him to read to me from a book of fairy tales. As he was reading, in his native tongue, she started moving and kicking a lot. I grabbed his hand and put it on my stomach while demanding that he keep reading.  A minute or so later she gave an almighty kick which stopped Ville reading mid-sentence. Upon his face was the biggest grin I think I had ever seen! I’m not a uber goober cheeseball usually but it did (does) make me teary eyed to think about it.

Now onto an even bigger belly (cannot fathom how there is somehow still skin to stretch), limited mobility and final preparations: